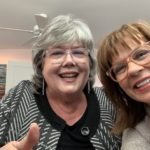 I’m thrilled to introduce you to guest blogger and my friend, Becky Jones.

As a child I spent every Summer at Girl Scout camp.  Those experiences prepared me for the future in many ways, but one experience especially influenced my spiritual life.

At the end of every two-week session there was a final campfire in the clearing of a heavily wooded area.  To get to the site, we had to walk quite a distance on a narrow, winding path.  Both sides of the path had thick brush, large stones, and a lot of poison ivy.  Walking the path during the day was easy; you could clearly see the trail and the hazards.   But traveling the path at night in complete darkness could be frightening, especially to first-time campers.  So to safely guide the group, Council Scouts –girls who had been at the camp for at least 3 Summers – stood at strategic intervals with their flashlights pointed down.  Until you reached the clearing, you could only see the path as far as the next spot of light – just a few feet further down the trail.  The seasoned campers knew that our path would be lit the entire way and that we would safely reach our destination.  But new campers?  They had no idea how far the walk was or what was waiting for them at the end of the trail.

Believers are all traveling toward the same destination – eternal life with God – but each experiences the journey differently.  On the path, some are ahead of us, some behind.  Those ahead of us can give us encouragement, showing how to avoid the crumbling shoulders and rocky terrain, and how to travel on the solid parts of the path.   And to those behind us we have the opportunity of  sharing our experiences of things yet unseen by them, in order to reassure them that the path is secure.

Although I’ve asked enough times, God has yet to reveal the entire map of my journey, but maturing faith has proven repeatedly that He does provide sufficient daily guidance if only I will seek His will. Just like on that flashlight-lit path, I must trust Him and His promises, and I yearn for the day that I have grown enough spiritually that the trust is automatic and complete.  David had reached that level of trust when he wrote Psalm 23:

3 He restoreth my soul: he leadeth me in the paths of righteousness for his name’s sake. 4 Yea, though I walk through the valley of the shadow of death, I will fear no evil: for thou art with me; thy rod and thy staff they comfort me.

Prayer:  “Lord, every day, let me be a faith walker – to see my life from Your perspective by spending more time with You in prayer, by reading Your Word, and by listening to Your Holy Spirit.  Help me to remember to encourage others just as I have been encouraged by my brothers and sisters in Christ.  Amen. “

After a fulfilling career in the medical field that took her all over the United States, Becky Jones now resides in Opelika, AL with her husband of almost 40 years.  For the past two years, she has been striving to “re-wire” herself to become a human BEING rather than a human DOING, and she still refuses to be defined by her chronological age.

For encouragement and recent news